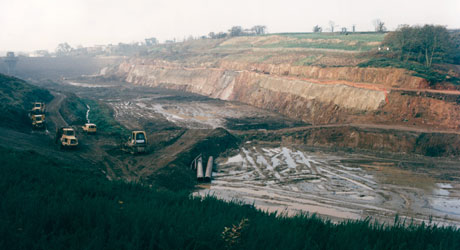 The Jersey Waterworks Company Limited was founded in 1863 and water was first supplied in 1869 from a well at Vicart in St Lawrence. These wells proved unreliable and the Company soon ran into financial difficulties, culminating in administrators being appointed by the Royal Court in 1874 to look after the Company’s affairs until a new company could be formed. This took place in 1882 when The Jersey New Waterworks Company Limited was registered.

The new Company sank several wells in the St Lawrence and St Peter’s Valley areas; but these were later abandoned in favour of surface water supplies. In 1893 it was decided to build the Millbrook Reservoir and three years later it was brought into service. In 1909 Dannemarche Dam was commissioned and the construction of Handois Reservoir in 1932 completed the reservoirs in what is now known as ‘Waterworks Valley’.

The Jersey Waterworks Company Limited was founded in 1863 and water was first supplied in 1869 from a well at Vicart in St Lawrence.

In 1921, water chlorination was introduced at the Millbrook treatment works where slow sand filters were used to treat the water and then in 1934 construction began on the Company’s main water treatment works at Handois.

Development work by the Company ceased for the duration of the Second World War due to shortages of materials and concrete. However, once the war was over and materials became available, work continued apace with the building of Le Mourier Stream abstraction station (1945), an extension to Handois water treatment works (1949), construction of Grands Vaux Reservoir (1953) and then the construction of Val de la Mare Reservoir (1960). The latest reservoir to be constructed is Queen’s Valley, which was completed in 1991.

The desalination plant at La Rosière began operation in 1970 and was converted from a sea water distillation plant to a reverse osmosis plant in 1999.

In November 2004, the Company adopted the trading name of ‘Jersey Water’, to reinforce its identity as a modern provider of wholesome water to the Island community.

The Company continues in its efforts of upgrading the raw and treated water networks, allowing the transfer of raw water between reservoirs and treatment works and the move, from a pumped system, to a gravity based treated water distribution system. This has resulted in a considerable increase in the ability of the Company to store, treat and distribute a wholesome supply of treated water to its customers.

In November 2004, the Company adopted the trading name of ‘Jersey Water’, to reinforce its identity as a modern provider of wholesome water to the Island community. At this time Jersey Water also launched a comprehensive website, providing customers and the general public with quick and easy access to information about the Company and its services.

The Company was in private ownership up until 1981 when the States of Jersey purchased a majority holding in the Company of approximately 74%.