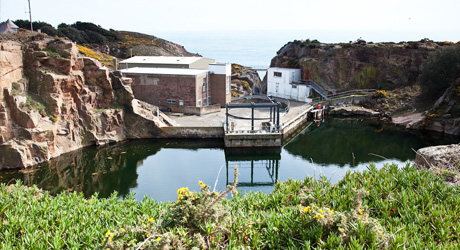 Jersey Water commissioned the desalination plant in 1970. The plant was built in an abandoned quarry close to the sea at La Rosière, Corbiere, at the south-west corner of the Island. Sea water is pumped into a deep pond (quarry pool) within the old quarry before being used for desalination.

By 1997 the MSF plant had reached the end of its operational life and it was decided to replace this important standby water resource with a modern plant using the Reverse Osmosis (RO) process, giving a number of significant operational benefits. On Friday 9th July 1999, General Sir Michael Wilkes KCB CBE, Her Majesty’s Lieutenant Governor of Jersey, officially opened the new RO desalination plant at La Rosière.

The RO desalination plant still plays a vital role in providing an alternative water source for the Island and when necessary adding to our natural water resources which are mostly surface water.

In 2016 (commissioned in 2017) the plant underwent a significant upgrade increasing its output capacity from 6Ml/day to 10.8Ml/day, which is about half of the Island’s daily demand for water.

How the desalination plant works
A deep sea water intake shaft and tunnel constructed below the mean low tide level on the foreshore allows sea water to be pumped at all states of the tide, which can vary by as much as 12m. A macerator device in the sea water intake shaft chops up seaweed and other large matter. The sea water is discharged and stored into the quarry pool, which then allows settlement of any unwanted debris rather than it floating to the surface.

The sea water is then transferred from the quarry pool into the primary treatment filters, which are downward flow type pressure filters. The primary treatment phase uses Dual Media Filters (DMF). There are six such filters that use a combination of sand and anthracite to filter the sea water, removing suspended solids from the seawater prior to further micron filtration. The filters are automatically back-washed on a time-interval basis, which are set to provide the optimum quality of the filtered water.

On leaving the filters, the sea water is passed through cartridge type filters, with a pore size of 5 microns, to prevent any remaining particulate matter fouling the RO membranes.  The filtered sea water then passes to the Reverse Osmosis (RO) plant, which comprises of two equal sized units, each having 432 spiral-wound type membranes and capable of producing 5,400 m3 of fresh water (permeate) per day. 45% of the filtered sea water is converted into fresh water, the remaining reject water (Brine) is returned to the sea. Water is supplied to each RO unit by a multi-stage centrifugal pump, operated using variable speed drives, at a pressure of 56 bar (gauge). The sea water rejected from the membranes is under high pressure and operates an energy recovery system, positioned in series with the electrically driven high pressure pumps, allowing recovery of energy which would otherwise be lost.

The plant layout and control system allows each of the two RO units to be operated independently or as a whole unit. The plant uses the mains electricity supply with two dedicated 11,000V, 2 MW feeder cables. At full capacity the plant produces 10.8 Ml of fresh water and consumes 45,000 kW of electrical power per day. 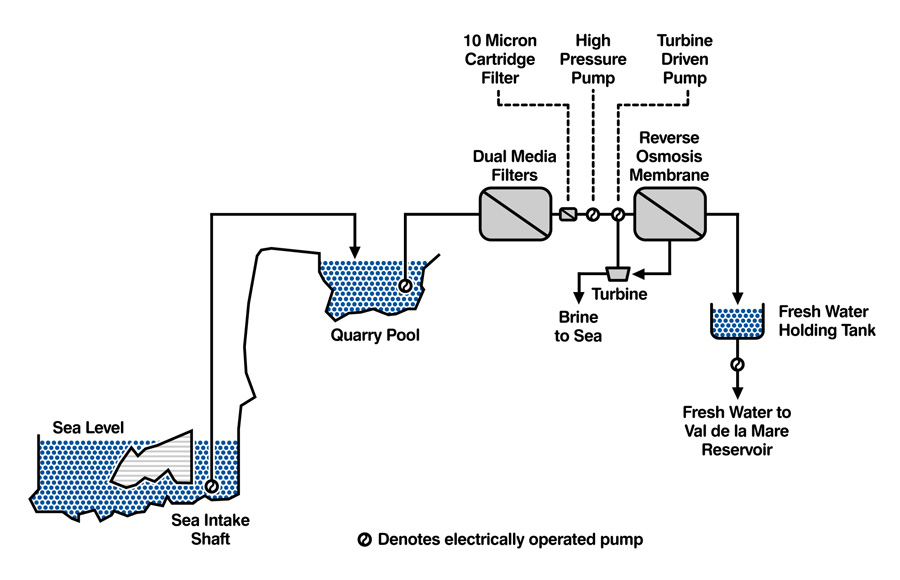